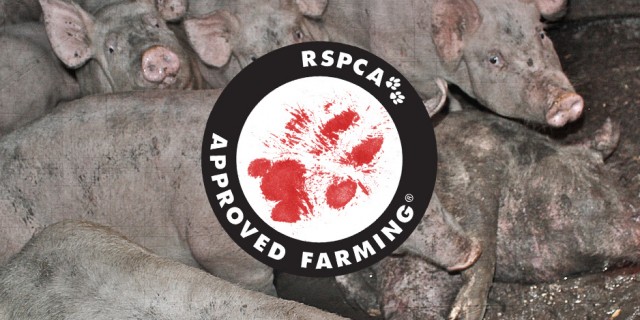 The RSPCA has been profiting financially from animal abuse and deceiving the public. Animal Liberation Victoria has been investigating the RSPCA Approved Farming Scheme, from which the RSPCA receives royalties, for the last 14 months. Over this time we have uncovered heartbreaking animal cruelty and filthy living conditions on RSPCA Approved Farms. ALV’s investigation has clearly exposed the fraudulent nature of this scheme.

Pig farms that have been approved by the RSPCA have failed to provide every one of the “five freedoms” animals are entitled to under the RSPCA’s Approved Farming Scheme. During our investigation 18 pigs were rescued, they suffered various injuries and illnesses including pneumonia, broken legs, cerebral palsy, testicular hernias, open necrotic wounds, septic arthritis, vaginal prolapses, and failure to thrive due to skeletal deformities. We routinely saw pigs living chest deep in their own excrement. We also repeatedly found corpses in various stages of decay, and dead pigs being cannibalised.

Sadly, despite the best care and veterinary treatment many of the pigs we rescued did not survive. Those who recovered are now living happy free lives in loving sanctuaries.

The public are rightly outraged at the appalling conditions the majority of pigs suffer in today’s industrialized ‘factory farms’, yet many are unaware of the immense cruelty that is part and parcel of the ‘free range’ farm industry. Our investigation has shown that ‘free range’ pigs being bred and killed as part of the RSPCA Approved Farming Scheme are living lives of misery in disgusting unsanitary conditions.

Pigs are highly intelligent social animals with the ability to feel both pain and pleasure. They are not ‘things’ for humans to breed, slaughter, consume and profit from.

Free range is a fraud that is betraying the animals and the public. Don’t buy the lies! Take action now…