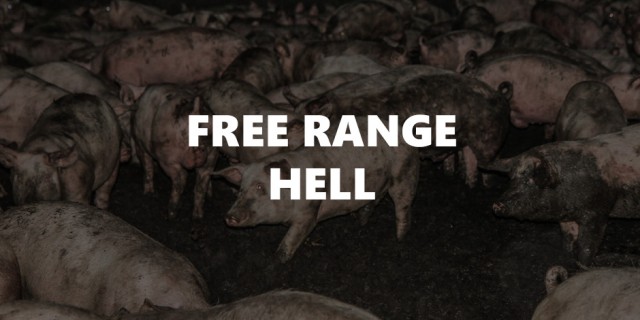 In 2013 Animal Liberation Victoria investigated a “Bred Free Range” pig farm in Meredith, Victoria, as part of a series of investigations into free range farms endorsed by the RSPCA. In 2011 the James Knight farm was accredited by the RSPCA’s “Paw of Approval Scheme” and sold their “free range pork” to independent butchers and as part of the Otway Pork brand. Neither James Knight nor the RSPCA will confirm if they continue to be accredited.

Our investigations on the James Knight farm uncovered cruelty, cannibalism and a vastly different scene to those depicted by the RSPCA’s promotional propaganda. The investigations found the whole property to be run down and dilapidated with dead bodies in various forms of decay left lying around to rot, pigs living up to their shoulders in their own waste, filthy water troughs, rat infested eco shelters, barren muddy areas for mothers to raise their young and pigs cannibalising the bodies of other dead pigs.

Free range is a fraud that is betraying the animals and the public. Don’t buy the lies! Take action now…